I’ve been a fan of TechCrunch for a long time. More specifically, since around mid-2006 I’ve read TechCrunch every day. I’ve found it to be a surprisingly sad experience watching the TechCrunch drama unfold and the company unravel over the last few months. Its been a little bit like watching a close friend go through a terrible experience without being able to lend a hand.

About a year ago AOL acquired TechCrunch and as a result, less than a year later Michael Arrington was ousted over claims of a conflict of interest between tech reporting and tech investment. In the subsequent months we saw TechCrunch’s star bloggers MG Siegler, Paul Carr, Jack McKenna and Sarah Lacy leave the company. Now CEO Heather Harde is reported to have been fired as well. Erick Schonfeld has taken Arrington’s place as editor-in-chief of TechCrunch. 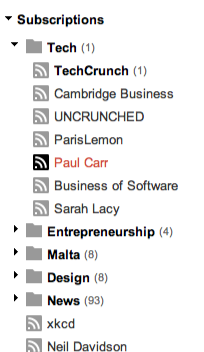 This morning I realised that my reading habits have subtly changed recently. One by one I’ve added Michael’s, Sarah’s, Paul’s and MG Siegler’s personal blogs to my RSS reader. I surprised myself when I fired up Google Reader this morning by hitting the “Mark as Read” button on the 50 or so TechCrunch posts and then proceeded to read every word on the other blogs.

The surprise was really my realisation that I’ve been doing this unconsciously for a few weeks now.

For the past two years or so, as TechCrunch has become exponentially more prolific, I’ve really been scanning their headlines to pick out the ones written by these authors. (The only exception being Alexia Tsotsis.)

Why? Well, the ‘tech reporting’ aspect of TechCrunch I can happily live without. Or, rather, I can get that very same info from any number of sources; including my colleagues at work who will excitedly scream at me in the morning that Microsoft has acquired Skype or that its totally ridiculous that some photo-sharing app has raised $40 million.

On the other hand, these 5 people have presented opinions: controversial, disrupting and insightful ones. Often openly disagreeing with each other right there on TechCrunch. They’ve looked at the landscape of tech and drawn patterns and conclusions that go beyond merely relaying the facts. I’ve not always agreed with them but they’ve challenged the status quo and made me think.

Companies you love to love…

I recently did some research back at the office into what we call “Customer Experience”. One of the folks we spoke to was TJay Belt, a long-time customer of ours who recently penned this blog post about us.

One thing I realised — or re-realised if that’s a word — is that as customers and users we attribute human attributes to organisations and if we like the organisation’s personality we can often literally fall in love with them. I love Google because despite their humungous size they’ve retained a visible engineering culture. I love Balsamiq because the company’s software and communications matches their founder’s and they’ve retained that despite the painful growth period of a young software company.

I used to love TechCrunch because their writings made me think, stimulated me to write myself and I could identify with the strongly opinionated approach taken by Mike and his gang.

You just need to look at AOL’s “company values” to see something terribly corporate, meaningless and impersonal. And as part of AOL, TechCrunch is slowly becoming impersonal, transforming itself into a useful but bland stream of facts.

I’m not unsubscribing from TechCrunch anytime soon but I hope that they manage to forge for themselves a new and distinct personality. Otherwise they will just become ‘another tech news site’, ripe for disruption by the next up and coming Valley smart-ass…

Designer. View all posts by Richard